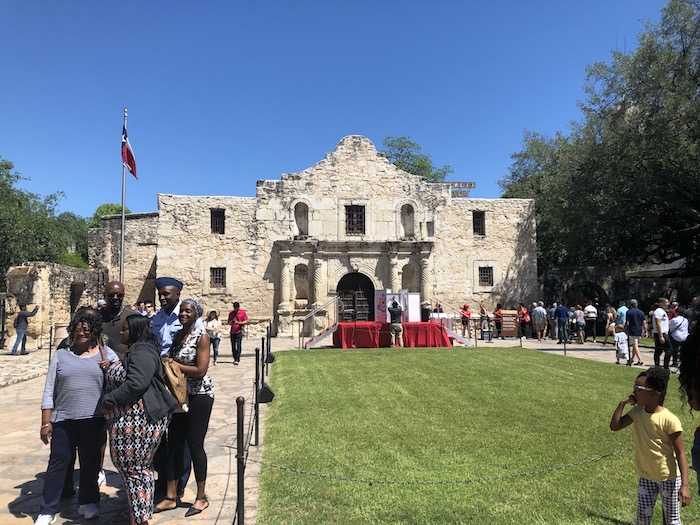 Happy Saturday everyone! I have been traveling NON- STOP for 2 weeks straight, and I had a BLAST, but now I am just a little bit worn out. Stating this, I wanted to take the time to recap my trip to San Antonio, and I am super excited to share! As some of you may know by now I absolutely LOVE to travel. I LOVE trying new things, meeting new people, understanding different cultures, and I would like to blame that aspect of me on my parents. Because we have travelled SO much to numerous places, and I truly believe it has helped shape the person that I am today. You may ask how does traveling shape a person? Well, if you think about it, when you are traveling you come across many new places, people, food, and different cultures, ETC.  that you may not have ever have seen in your lifetime if it wasn’t for traveling. I have seen SO much and I feel like it helps me have more of an opened mind towards certain things. I feel I can understand people more, and I feel overall, its just a great experience to travel and see life in a NEW perspectives. Now, I will dive into our San Antonio recap! 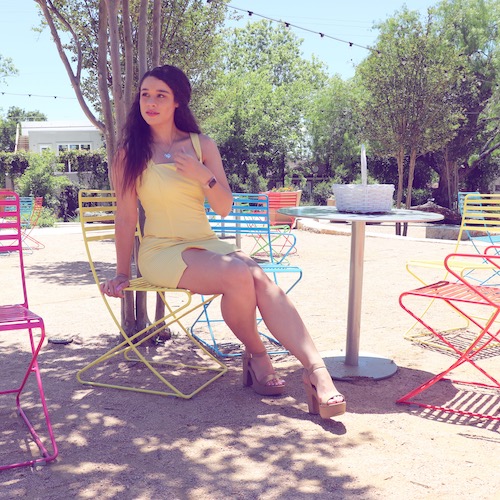 How we ended up in San Antonio..

Over the past weekend my boyfriend (Trey) and I decided we wanted to explore a new place that we both have never been to before, and that was easy to access for a day trip. So we brainstormed all the places we wanted to go for a couple hours. We knew we were not traveling outside of the state of Texas, so that made our decision easier. LOL Long story short, we decided to travel to San Antonio, which is roughly 2 hours from where my boyfriend is currently stationed in the military. After we both decided San Antonio was our choice for a day trip, we then went into more brainstorming of what all we wanted to accomplish for our day trip. So we made our itinerary for our day there, and now I will explain what we conquered in a day trip in San Antonio. 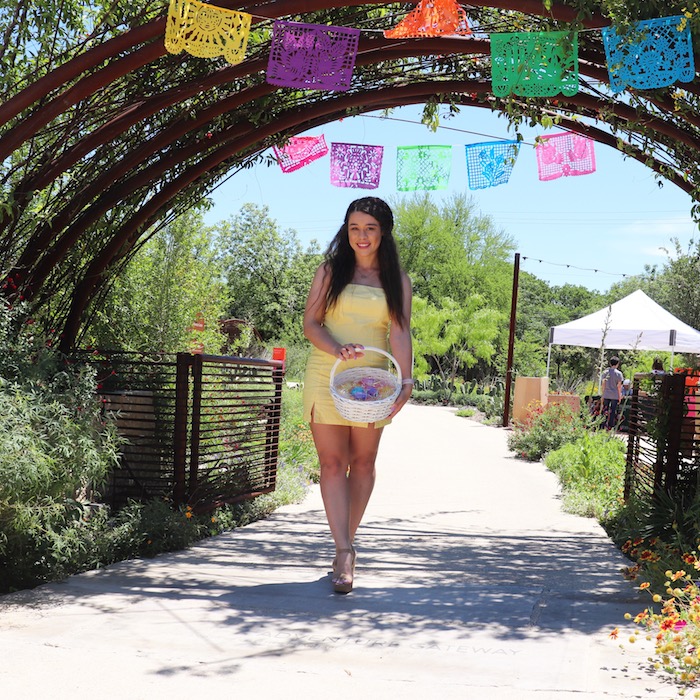 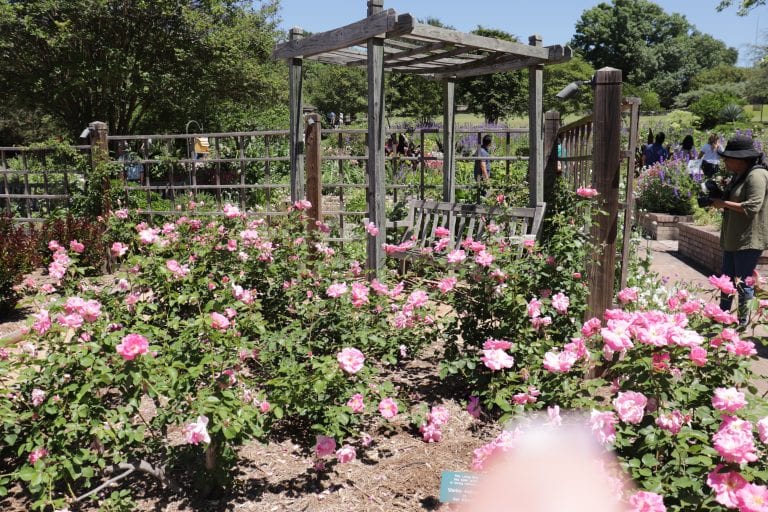 After driving for 2 hours, our first stop was the San Antonio Botanical garden. First, we decided to go because I love flowers like no other. Secondly, I wanted to shoot a few Easter photo shots for my blog, and social media. (Which is shown above). When we finally arrived it was roughly about 12pm when we got here, and this Botanical Garden is HUGE with 38 acres to explore! It is recommended that it takes roughly 2 hours to conquer the whole garden, which I felt was accurate.

The whole landscape of the garden was amazing. There were a lot of paved paths if you did not want to walk on the un even pathways which was really nice. They also are very kid friendly as the Botanical Garden has an Family Adventure Garden which consist of children playing in sand, water, kid friendly mazes, and climbing. They also have a lot of small houses where kids can play and let their minds imagine.

While exploring around the San Antonio Garden you will see that they always change exhibits.There were TONS of lego sculptures(which was pretty cool)like large peacocks , turtles and more made out of legos, and some contemporary art.

The Garden offers many events like gardening classes, bird watching, water conservation, and more. I definitely recommend if you are into flowers, and just nature in general to go visit the San Antonio Botanical Garden as you will not be disappointed.

Cost: $12.00 to get in..they offer special discounts as well such as military. 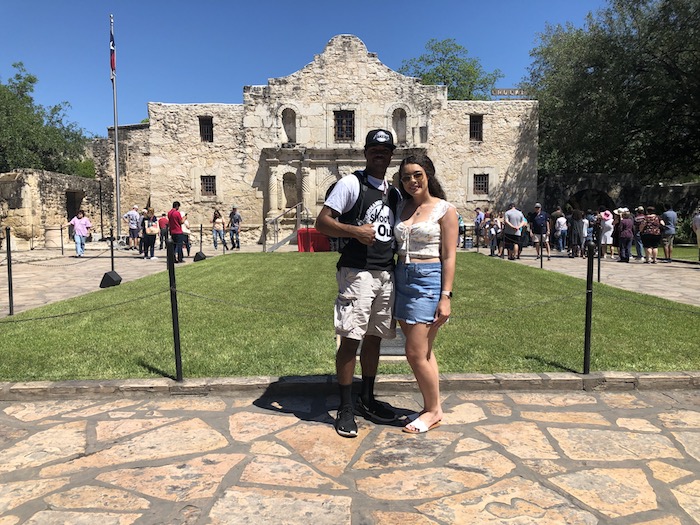 Next, Remember the Alamo

After my boyfriend Trey and I left the Amazing Botanical Garden,we decided to visit the Alamo. I was MAJORLY excited to visit this historic landmark as I had never been before. The Alamo is located in Downtown San Antonio,(15mins away from the San Antonio Botanical Garden) and there are plenty of parking areas designated for the Alamo visitors. After we parked our car, we started walking a couple blocks down to Alamo. What was pretty awesome to see was as you started walking towards the Alamo, you seen people in character dressed up and reenacting that time in history all through out our time visiting. From there we reached the line to get into the Alamo which was kind of long, but totally worth the wait! We waited roughly about 45mins. But to be honest it didn’t seem that long because we were talking, taking photos, and reading the Alamo history time line along the way before eventually making it to the front door!

Once you finally make it to the front door of the Alamo, the employees that work there will take your photo as a souvenir to purchase later.After you enter the Alamo, it was AMAZING to see how well preserved this historic landmark is. You see all the names of all the men fighting in that war listed on the walls, which was crazy to think about that all these men died here because of something they felt strongly about. From there, you will continue see more history timelines about the Alamo. The Alamo, also offers paid guided tours which I think would be beneficial to go on.

After we spent about 40mins to an hour exploring and learning about the history inside the Alamo, you can walk back outside to explore more. When you walk outside you can either go straight into the gift shop, or go explore more history. If you decide to go to the gift shop, it is a pretty nice size, and plenty more souvenirs to choose from to purchase. Now, if you decided to go explore more, you will find more people dressed up in character to give you a sense of how it was back then when this time in history was really happening. Overall, if you are ever in San Antonio IT IS A MUST that you go visit the Alamo. “REMEMBER THE ALAMO”

KEEP IN MIND: you CANNOT take pictures with your phone, or any type of camera once inside the Alamo.

Admission in to the Alamo: FREE 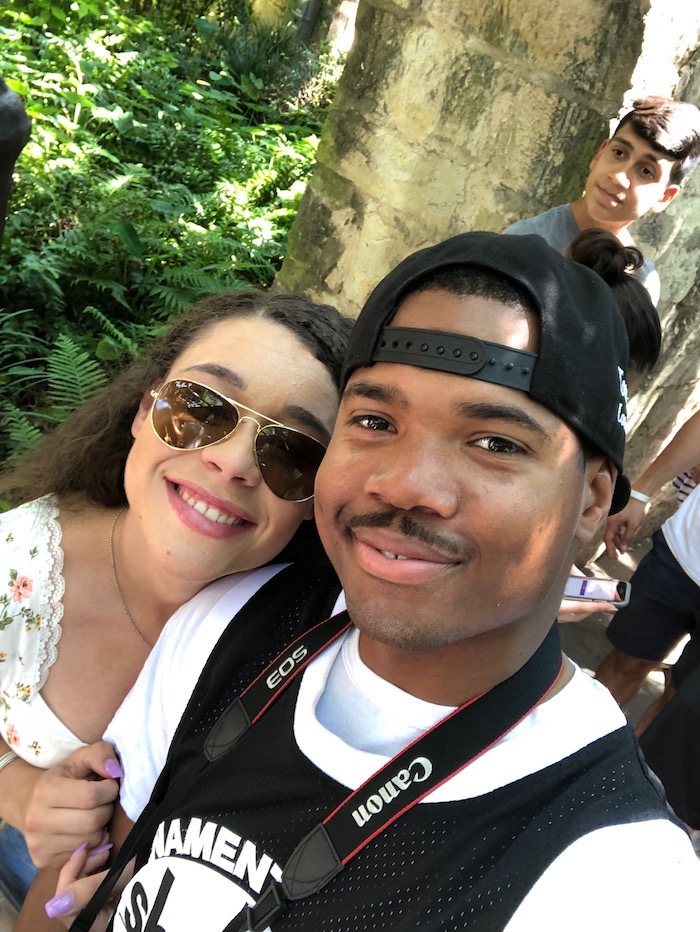 You may ask your self.. What is the significance of the Alamo?

The significance of the Alamo is essentially what it is to be a Texan.On this historic land mark many men died to gain their independence from Mexico.The Alamo was the battle ground where Texans and the Mexican Army whom was led by General Santa Anna. Though the Mexican Army led by General Santa Anna won the war the first time around on March 6,1836. The bravery and determination of many heroes such as David Crocket, and Jim bowie (just to name a couple)  to not give up and make it known to “REMEMBER THE ALAMO”, which resulted in giving Texans hope, and later causing them to WIN their independence from Mexico. If the Texans had given up, our border might be a little different than what it is today. 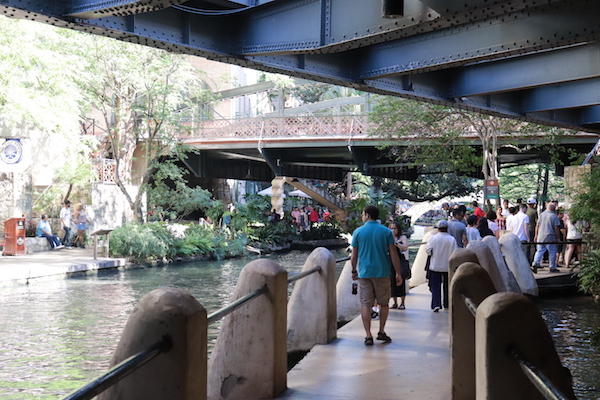 Lastly, after we concluded our trip to the Alamo, we then headed to the San Antonio riverwalk. The San Antonio river walk was literally a block over from the Alamo, which took about 5-10 mins to walk over. Also, if you are planning on staying longer than a day in San Antonio, the Hyatt Regency Hotel would be a GREAT place to stay, as it is right in the middle of it all with extremely easy access to everything. Now, once we walked over to the river walk, you then had to walk down a flight of stairs because it was located underneath the downtown streets, which was pretty cool to see. Once you got down the flight of stairs there was SO much going on from people walking around, eating, shopping, dancing. It was just a very live experience. You can also pay to tour the riverwalk on the boat shown below if you don’t feel like walking. 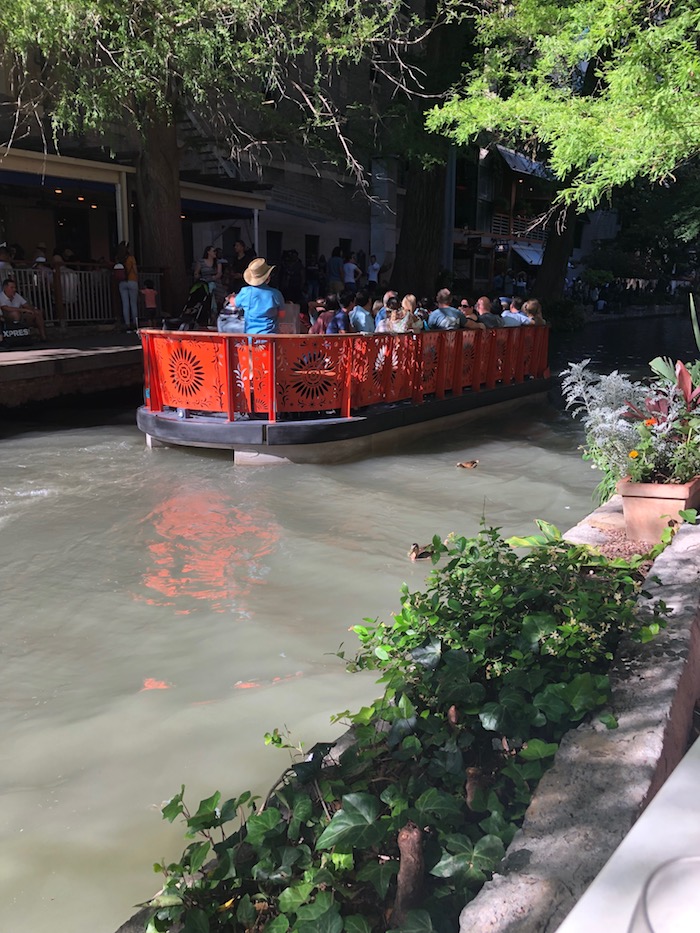 My boyfriend and I decided that we wanted to walk around instead, so I can’t exactly give you a good review on the boat tour, so you will have to let me know that part if you decode to. But as we were walking around there were many ducks swimming in the water, and walking around on the sidewalk. There were so many restaurants and stores to choose from, it kind of was overwhelming in that sense because it was a day trip for us, and we wanted to conquer and experience as much as possible.

After we found a few places to shop, we started to get a little hungry. But again, there was SOO much food options to choose from, like Mexican food, Irish pubs,and BBQ to name a few. So while we were walking around for about another 15-20mins we finally decided we wanted to eat some BBQ!

We stopped at this restaurant called The County Line BBQ, and it was SO GOOD. We both ordered a full rack of ribs,with sides of potato salad, mashed potatoes, fries, and beans.(Not keto I know, I took a break!) We also ordered as an appetizer which was their famous bread,which was filling within its own. Then I also ordered a strawberry margarita, which was pretty good as well.

After we ate our food, we decided to walk around a little more to explore. We ended up stopping by the Selena bridge to take a few pictures. The Selena Bridge was named after the famous Bidi Bidi Bom Bom singer Selena, because she and her family used to drive up from corpus christi to shop. So as you can tell this bridge was a pretty popular spot for locals, and visitors to snap a photo.(It took forever to be able to get a photo by myself on this bridge!). 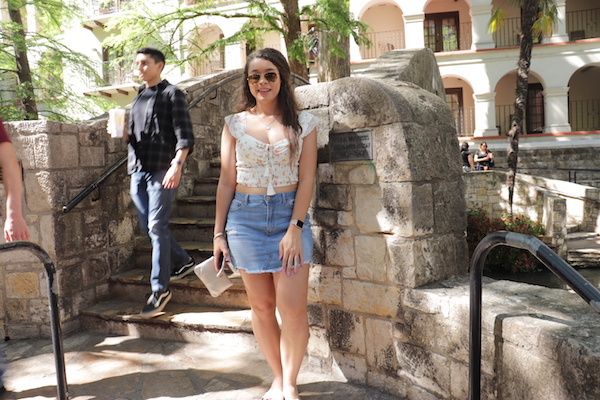 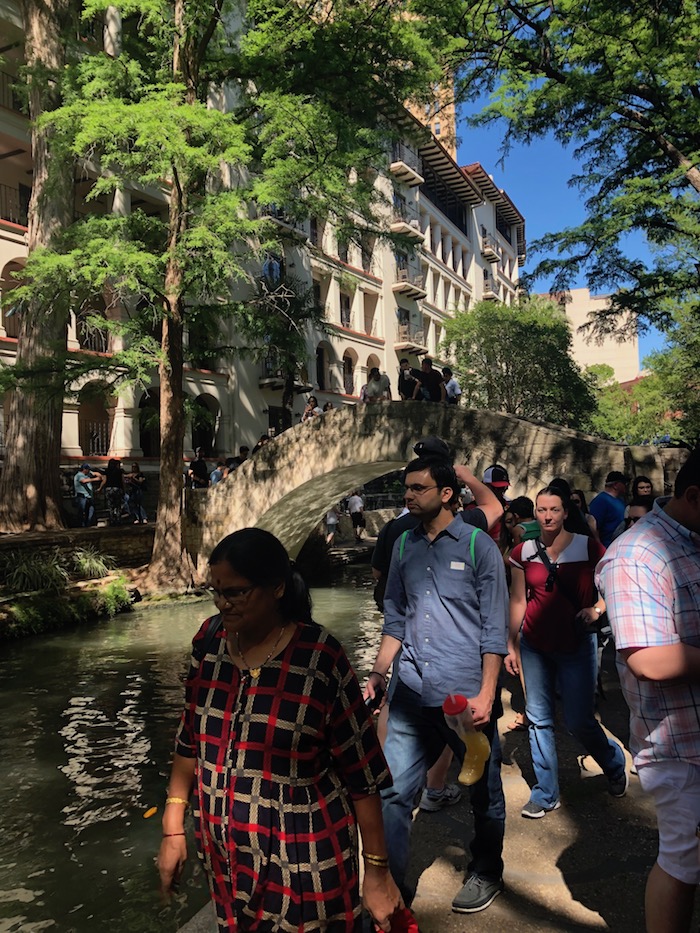 From there we decided to conclude our trip down at the riverwalk around roughly 6pm. But before we headed home we walked back up the stairs to get access to the main street which is the level where the Alamo is located. We passed some cool places like wax museums with 250 wax figures, the Ripley’s Believe it or not, and the Tomb Raider 3D ride, and more. I would definitely check those locations out as they look super fun. We all passed a Dippin Dots which I always, NO matter what have to get because they are SOO good. So my boyfriend and I ate our Dippin Dots, then walked back to the car to head home. 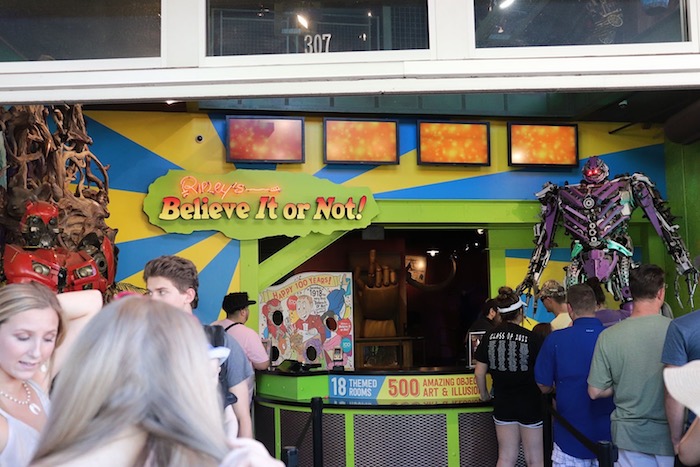 Our day trip to San Antonio was super fun! I feel like we accomplished ALOT in just a day, and seen most of the main attractions within San Antonio. I highly recommend this city as a must to visit as it holds a big part of history.

More things to do in San Antonio

Thank you all for reading and following along with the Ambitious Desert Queen! I hope if you ever decide to take a trip to San Antonio this post gives you some good ideas to plan your trip.

Shop my looks from San Antonio below!

This site uses Akismet to reduce spam. Learn how your comment data is processed. 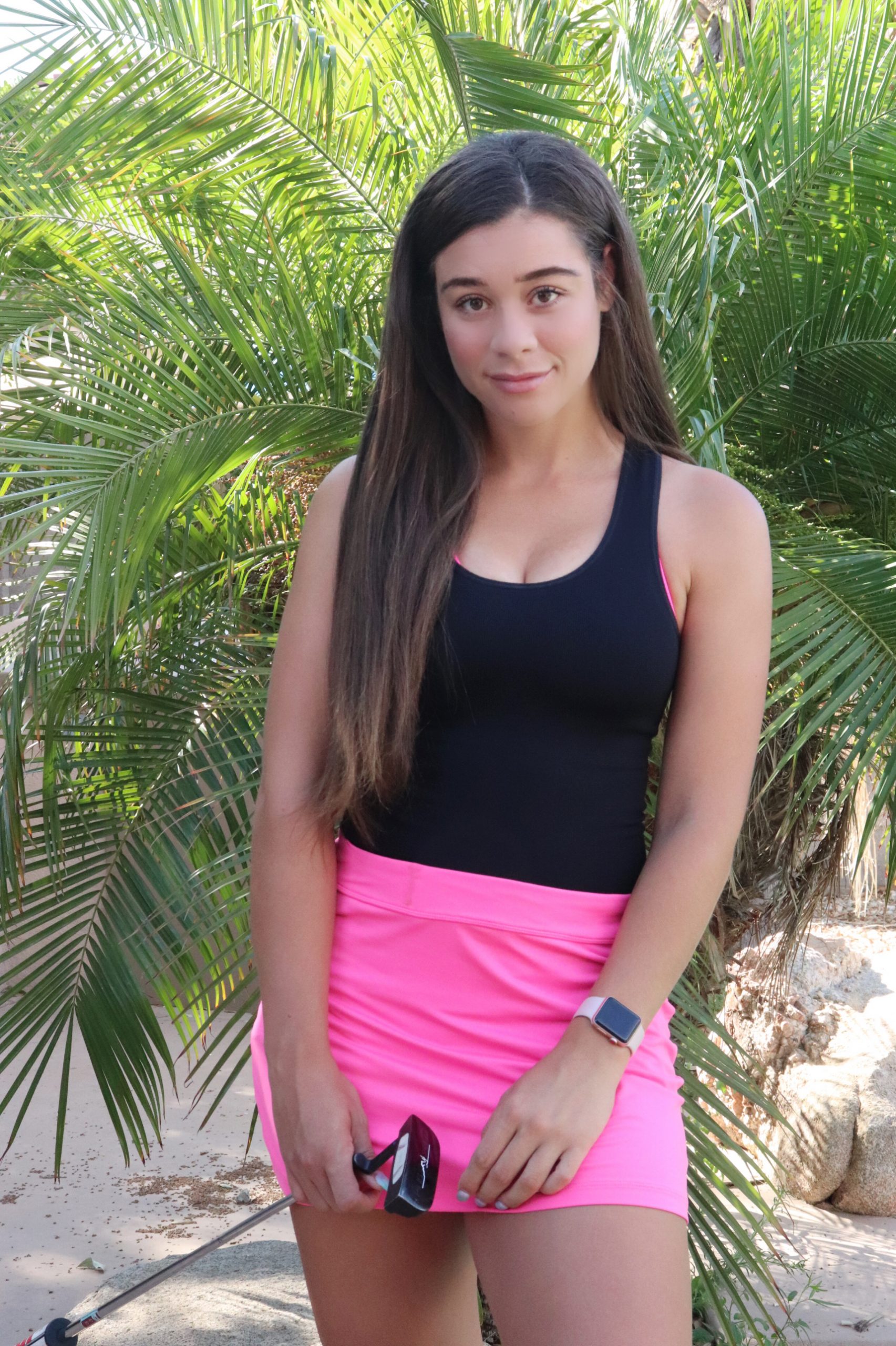 My name is Kelsey! I am an Arizona Blogger who shares ON and OFF the Golf course fashion, Lifestyle, and Blog tips! I will also be showcasing my life as an aspiring golf professional! Hope you stay awhile! <3

In case you Missed…